Welcome to Week 20 of Handpicked Songs for Preschoolers! I can’t believe we’re already 20 weeks in! As a thank you for following along, I’ll be randomly selecting two of my subscribers and sending them a $5 itunes gift card this weekend.

That way, you can buy some of the music I’ve been recommending. Or, just rent a movie. Or just go crazy (as crazy as you can with $5).

So, on to today’s song recommendation!

Down by the Bay

This is an old classic that you have probably heard at some point in your life. If not, I’m excited to make an introduction.

“Down by the Bay” is an echo song. I absolutely love using echo songs with preschoolers because it’s a simple way to get them singing along. They don’t have a lot of lyrics to memorize and most children can easily pick up on the melodies because the leader demonstrates them so often.

It is easy to be a music consumer instead of a music participant, but echo songs keep us participating with the music.

It’s also a really creative preschool song. My preschoolers could make up endless verses for this song—some of them rhyme, but even those that don’t are a great chance to be creative and silly. Use this as a chance to teach rhyming, improv, & creativity, or just have fun with your child as you sing “Down by the Bay”.

Raffi made a famous version of this song which includes most the traditional verses.

The crowd at this concert didn’t nail the echo, so make sure you check out some other versions if you want to hear how it goes. You can find also it on Amazon

Start with any of those, learn the song or refresh it in your memory, and then launch out on your own!

I also love Hap Palmer’s version. If you haven’t encountered Hap Palmer, he’s a household name in children’s music and has made great contributions to the world of music and movement.

Hap Palmer’s version of “Down by the Bay” uses the classic song and incorporates the musical instruments into the rhyming section at the end. After each instrument gets mentioned, it plays a little solo. It’s great for connecting the name of the instrument with the sound it makes. 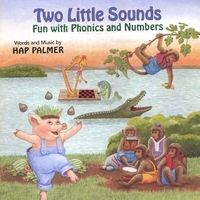 It’s on his album Two Little Sounds. I found the album on itunes and Spotify.

Thank you again for your support and enthusiasm for this series. Subscribers–watch your email this weekend. I’m looking forward to gifting two of you!

Subscribe to the Handpicked Series so you never miss a recommendation!